The ADNEX risk model can be used by medical doctors to diagnose ovarian cancer in women who have at least one persistent adnexal (ovarian, para-ovarian, and tubal) tumor and are considered to require surgery.1 ADNEX estimates the probability that an adnexal tumor is benign, borderline, stage I cancer, stage II-IV cancer, or secondary metastatic cancer (i.e. metastasis of non-adnexal cancer to the ovary). The model was developed by clinicians and statisticians from the International Ovarian Tumor Analysis (IOTA) group, and is based on clinical and ultrasound data from almost 6000 women recruited at 24 centers in 10 countries (Italy, Belgium, Sweden, Czech Republic, Poland, France, UK, China, Spain, and Canada).

The ADNEX model uses nine predictors. There are three clinical variables, age, serum CA-125 level, and type of center (oncology referral center vs other), and six ultrasound variables, maximal diameter of lesion, proportion of solid tissue, more than 10 cyst locules, number of papillary projections, acoustic shadows, and ascites. All patients included required surgery as judged by a local clinician. As with all current diagnostic models for adnexal tumors (e.g. IOTA models, RMI, ROMA) it implies that patients selected for expectant management were excluded when creating the model. As a consequence ADNEX cannot be applied to conservatively treated adnexal tumors.

The manuscript describing the model is published in the BMJ, and we append the abstract of the paper below.1 The ADNEX model has been externally validated in the original paper, and in six subsequent studies.2-7 These studies confirm the discrimination between benign and malignant masses. Further calibration results when presented are good. Discrimination between the five tumor types is more difficult to investigate due to the low prevalence of several categories, and the fact that this is a non-standard analysis that needs to be done with care.8 As a result, we wrote a letter to the editor about one of the validation studies.9 Nevertheless, available results are good.

ADNEX cannot replace training and experience in ultrasonography and cannot compensate for poor quality ultrasound equipment. The parameters used in ADNEX are based on the terms and definitions as published by the IOTA group.10

The ADNEX model is implemented electronically in various formats:

By installing this software you agree to the terms of the License Agreement as available in the disclaimer of the application.

Histological classification and surgical staging of the mass.

The Assessment of Different NEoplasias in the adneXa (ADNEX) model contains three clinical and six ultrasound predictors: age, serum CA-125 level, type of centre (oncology centres v other hospitals), maximum diameter of lesion, proportion of solid tissue, more than 10 cyst locules, number of papillary projections, acoustic shadows, and ascites. The area under the receiver operating characteristic curve (AUC) for the classic discrimination between benign and malignant tumours was 0.94 (0.93 to 0.95) on temporal validation. The AUC was 0.85 for benign versus borderline, 0.92 for benign versus stage I cancer, 0.99 for benign versus stage II-IV cancer, and 0.95 for benign versus secondary metastatic. AUCs between malignant subtypes varied between 0.71 and 0.95, with an AUC of 0.75 for borderline versus stage I cancer and 0.82 for stage II-IV versus secondary metastatic. Calibration curves showed that the estimated risks were accurate.

The ADNEX model discriminates well between benign and malignant tumours and offers fair to excellent discrimination between four types of ovarian malignancy. The use of ADNEX has the potential to improve triage and management decisions and so reduce morbidity and mortality associated with adnexal pathology. 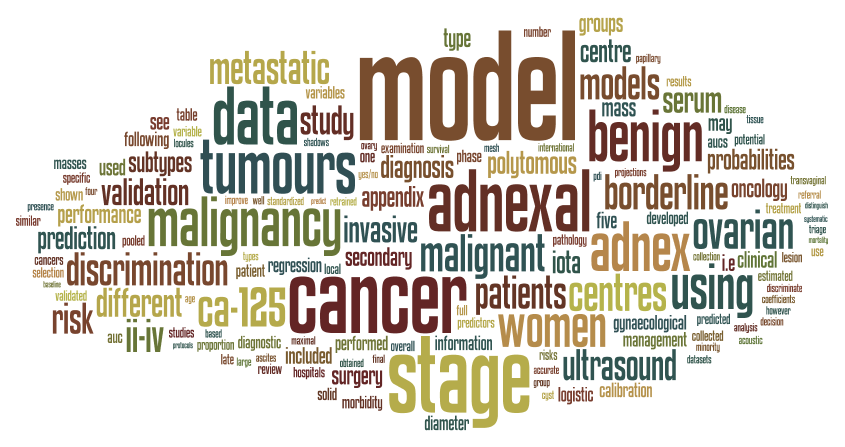